In order to actually get out of town, we had to get rid of so much stuff. Enough so that the semi-yearly Brush and Bulky pickup was not enough. So we finally took a trip to the Dump! 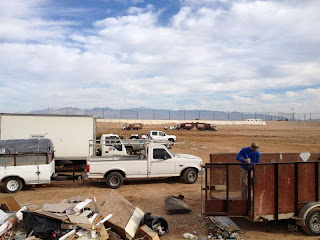 Clearly nothing pretty to look at, but both Mr S and JW loved the trip.

And since we are going so far, and NOT driving, we had to get the cars there. This was almost worth the price of admission, just to see the guy drive the van up a steep incline BACKWARDS! I was sure he was going to drive it off the end, which would have been great to get the insurance money. 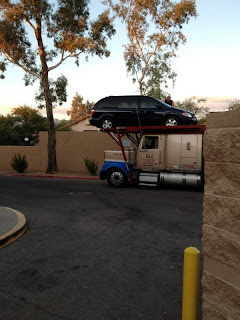 The bimmer was not as entertaining after watching the van get put on, but still cool: 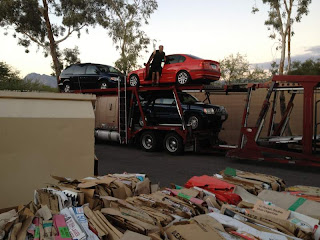 And no, the boxes were not important, it was just the backside of a grocery store. No Mr S or JW to obsess over the recyclables.
Posted by Chad at 8:34 PM