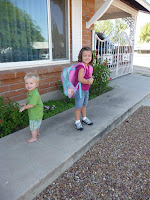 Two years ago, G-man started preschool. That was soooo exciting! But, now it comes to the second child's turn. Kiwi started preschool at the same place as G-man, and she is really excited to be a schooler.

Does it mean you are finally mature when you have more kids in school than not? I think I am feeling a little like I miss them, even thought they haven't gone anywhere yet.
Posted by Chad at 12:48 AM 1 comment: 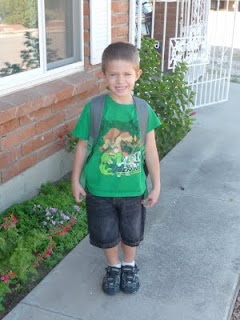 The difference between a first grader and a kindergartner:

It took half the year last year to get G-man to let us drop him off at the front of the school. By the second day of school this year G-man told me he knew where to go and I could go back to the car. Well maybe I didn't want to go back to the car. Can't you let me coddle you a little bit longer?
Posted by Luann at 12:13 PM 2 comments:

We have a guest house on our property that has recently been vacated. This small one bedroom add on was in pretty sorry shape when we bought the house and we've been slowly improving it. It seems each time we rent it out to someone new, we do a little more (we've only had two renters so far).

The first night I was in there starting to move things around I found a snake in the bathtub. It was just a little snake. I really thought the kids would get a kick out of seeing a real snake. We got out our old turtle aquarium, picked up the snake with some papers, and moved him into the aquarium. Then we moved the aquarium into the house. Apparently the snake didn't like the aquarium so much because in the morning it was gone. In our house. Ahhhh! We still haven't found it. We think it was a night snake. They are only slightly venomous.
Worst case scenario: One of the kids finds it hiding somewhere and gets bit.
Best case scenario: It finds/found its way outside.
Scenario I can live with: It lives under our cabinets and eats the crickets. And here you were thinking organic pest control was an oxymoron.

Our fun with reptiles doesn't end there, oh no. On Saturday we moved a cabinet from our storage shed into the guest house with the intent of hanging it in the guest house kitchen. We found a gecko hiding in it. Unfortunately it ran behind some boxes before I could get a jar to catch it in. So this week we've managed to release a snake in our house and a lizard in our guesthouse. Fortunately the guy who will be hopefully renting the guesthouse probably wouldn't mind having a gecko in his bedroom.

G-man's quest to get a reptilian pet was almost fulfilled this week. I think I may have to veto his preference for snakes. There is nothing quite like being scared of every pencil and ribbon on the floor of your home.
Posted by Luann at 12:48 AM 2 comments:

The Curious Incident of the Minivan in the Mountains

This past weekend started out great. We were all set for a camping trip in the White mountains with my side of the family, followed by my ten year reunion, then a short visit with my sister who lives in Utah. We drove to the mountains without major incident. We spent two days at the campsite doing all the normal camping things...eating Smores, playing with fire, hiking through meadows, eating rocks (oh wait, that was just Mr. S). I got to know my two little nephews a little better and had fun chatting around the campfire.

Things started to unravel on Saturday. Chad and I packed up our tent and the majority of our stuff and headed to the city for my ten year High School reunion. The kids were staying with the intent of them traveling back with my parents on Sunday. As we headed out of the campsite we found my parents car stranded on the side of the road. The clutch was out and they couldn't start it, but they had a plan. The camp host would replace the clutch and they would be on their way again by Sunday. So with no need to worry (too much), we continued on our way, leaving the kids behind.

Things unraveled quickly in the 5 hours we spent traveling back to the city. The part couldn't be found in the mountains. The only one available was in the city. We had to pick it up and bring it back to the mountains. At this point I'd already missed one party I had hoped to go to...but I made it to the main reunion event. It was fun. I saw and talked to some people I hadn't seen in a while. I was sorry some hadn't come that I hoped would. I don't regret going, although some troubles may have been avoided if we hadn't left the kids.

We left for the mountains Sunday morning with my sister from Utah in tow. The part was delivered. It rained and hailed. The truck didn't get fixed. We finally left the mountains at 5pm with 8 people and a dog in our 7 passenger minivan. We traveled to my brother's house that was only 3 and 1/2 hours away. I laughed as we sang "Found a peanut" and my sister and I entertained with our two favorite camp songs: "Honey you can't love one" and "the Austrian yodeling song". These songs are very amusing when a car full of grown adults is singing (with some harmony too). We were trying really hard to make the best of a frustrating situation.

We left my sister and parents at this point. They travelled back to the city with my brother while our family headed to our home that was, if all went well, only 2 and 1/2 hours away. All did not go well. In 90 minutes we were stopped dead on the highway. Mr. S started to cry. He doesn't like to be stopped in the car when he's trying to sleep. Kiwi and G-man slept through it all. An hour later we began to crawl forward, slowly passing the mangled cars that caused our delay. Its hard to be angry when you know someone surely lost their life in the wreck. We crawled into bed at 2am, grateful to be home after traveling over 1000 miles and spending more than 25 hours in a car since leaving. It's too bad our A/C hadn't quit while we were gone. It would have been the icing on the cake.
Posted by Luann at 10:45 PM 3 comments: