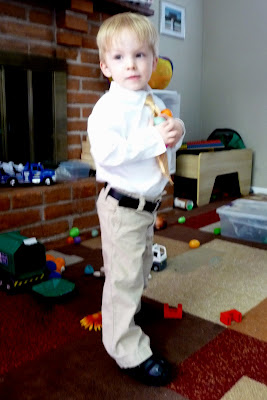 Mr. S had a birthday this past week. My little blondie turned three and not a moment too soon. He has been looking forward to this ever since his sister turned six in February. His desire for the special day were many and changed constantly. He wanted a party. He wanted a toy story cake. He wanted friends there. He wanted balloons. He wanted pizza. He wanted hamburgers. I could never pin him down on the exact details. Then I realized he was turning three. He just wanted a day to have what he wanted. So that is what we did. 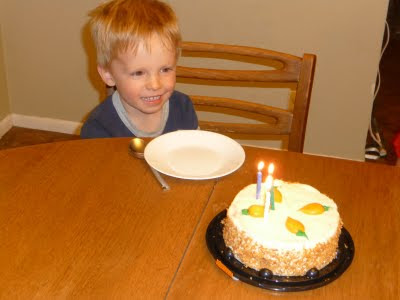 We went to the toy store and he picked out his birthday present (a duplo garbage truck and crane). He went to the grocery store and picked out his cake and ice cream. He picked out a balloon on a stick because then he didn't have to be afraid it would float away. He was allowed to choose whatever spot he wanted to sit at for dinner. He was allowed to eat whatever he wanted (or didn't want) to eat for dinner. His sister was not allowed to tell him no or boss him around. I think he was in heaven. 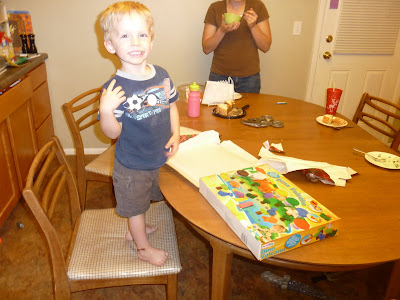 Yesterday I took him to the doctor for a well-child visit. He was shy at first but once he warmed up to the doctor, she couldn't get him to stop talking. Being the third child, once he realized he had someone who would sit and listen, he was ready to go on all day about garbage trucks and trash cans with smattering of information about his day to day life.

S is such a sweet boy and a joy to talk to. He is very articulate for a three year old and always makes me laugh with what he has to say. He is probably our most observant child, always aware of how things are placed and where their proper place is. He is also a daddy's boy which can be nice sometimes and can be kind of annoying. He loves to cuddle with his sister's baby dolls and play daddy.

But no matter how much he shuns me for dad on the weekends, he will always have a special place in my heart. I think I can officially declare that at last I have a left handed child! I was the third child in my family and I am left handed. Now my third child is left handed and I couldn't be happier. As much as I enjoy having that unique trait, it is nice to have someone to share it with. I love you Seti boy! 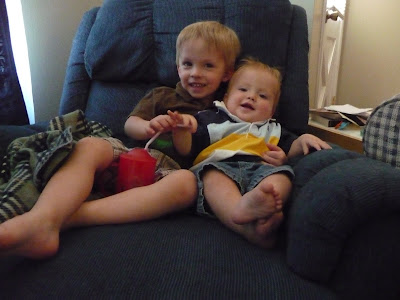 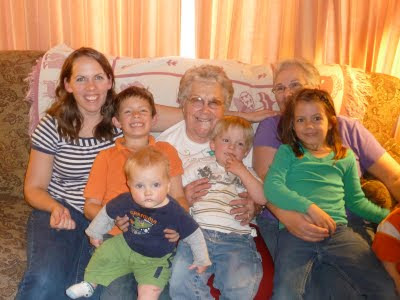 My grandma Cox came down from Utah to live with my parents for the winter(she's my mother's mother). She amazes me how spry she is at 94. We tried to go up and see her as often as possible while she was only a two hour drive away instead of 12. All my great grandparents had passed away before I was born. I'm thankful my kids will have some memory of her.

Whenever we came she would sit me down and talk family history. I'm kind of scared to look too closely at her side because her family and Chad's mom's family we're both Germans from Wisconsin. If I look too hard I might find we're related somewhere back there. 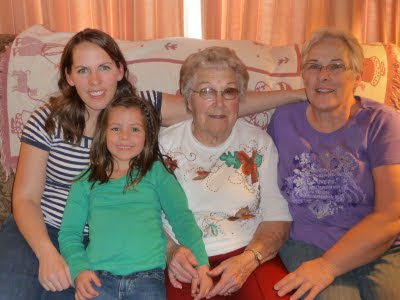 Kiwi was named after my grandmother's mother Adeline and she passed on some things to Kiwi that had belonged to her mother. One was a love letter from my great grandpa to Adeline.
I was named after her first born daughter that passed away at birth. I feel particularly close to my grandma Cox because of this. I hope I have lived my life in a way that is worthy of that name. I love you grandma. 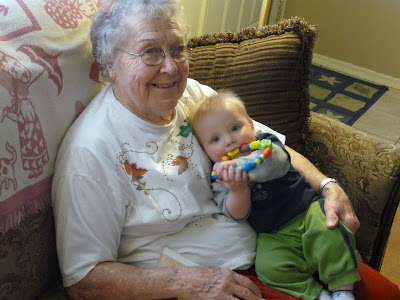 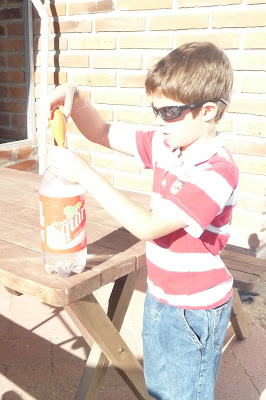 G-man had to complete a science project for his class by the end of the quarter. We didn't have it done in time for the science fair. It turns our 2nd graders aren't the best communicators. G only gave me a weeks notice for that one. But now we are learning the questions that need to be asked to try and overcome those communication barriers. Plus I have no room to talk. I think I'm the queen of poor communication skills.

G-man chose to blow up balloons with carbon dioxide by mixing vinegar and baking soda. We were trying to see if we could create enough gas to make one burst. We were able to get one to fly off the soda bottle. But not to burst. I was tired of using up all my vinegar. 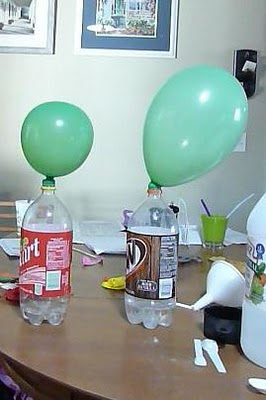 It was the perfect 2nd grade science project. G-man really loves chemistry and blowing things up.
Posted by Luann at 11:44 PM No comments: