As part of our trip to AZ, Mr S got to celebrate his 5th birthday with family. We went to the most exciting place of all, Chuck E. Cheese's!
The best part was the one machine that was broken and just spat out a number of tickets for each token. It is the little things when you are little.

Some things interesting about Mr S at this age:

1. Reads lots of words already
2. Loves his preschool
3. Loves to give hugs and kisses to everyone
4. Loves to build and rebuild and rebuild his new LEGO sets
5. Rides a bike with training wheels
6. Still loves his daddy
7. Can't wait until he is 6 so that he can build the next level of LEGO sets
Posted by Chad at 9:12 PM No comments:

One thing we knew we had to do while in AZ is take a trip to Tucson and see our friends.  We miss everyone there immensely. I know if we ever went back, it would be like we never left. It's hard to leave your family when you move away.  Even the ones you aren't related to. 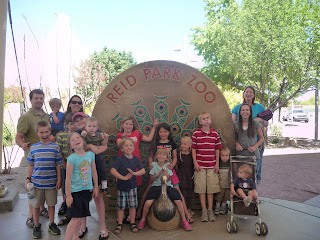 We were so glad we could go back to AZ for Kiwi to get baptized.  Grandpas and Grandmas were there. Aunts and Uncles were there.  Cousins were there.  Even friends from Tucson drove up to be with us. It was a beautiful day.  I cried. My little girl is growing up. 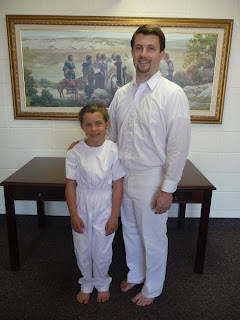 There really are no words to describe the day beyond wonderfully perfect. Thank you everyone for helping everything come together so beautifully.
Posted by Luann at 8:41 PM 1 comment:

What is the point of living far from family if it is not to visit, especially by airplane? The kids love flying, so that is what we did. We had promised Kiwi that she could get baptized in AZ if we moved to Boston. Now to make good on that promise. Look for a post on the baptism to follow. This is just about the travel.
The flight out was great. All the excitement, anticipation, and all that. Soda was great, non-stop, and devices to their heart's content.

The flight home was the exact opposite. One stop in Houston, with just enough time to grab something to eat. Of course, since the Sequester of 2013 was just starting, the politics caused massive flight delays. We didn't get out of Phoenix on time, so had time to watch the planes.

We did of course miss the connecting flight, and then had 4 hours to kill in Houston. United did give us $120 in food vouchers for the airport, and we managed to spend $100. Turns out, even with the high cost of food, it is hard to spend that kind of money.

The "best" part of the trip is walking fast to a public airport restroom, so that your oldest can vomit out $30 in airport food. Thankfully we were not in the air for that one.
Posted by Chad at 8:31 PM No comments:

Patriot's Day commemorates day when the first shot of the American Revolution was fired.  It is celebrated here in Boston, although I personally had never heard of it before.  The day is always on a Monday, mid April.  It actually starts on Sunday night around 11:30 with Paul Revere's ride.  Then there is a reenactment of the Battle of Lexington at dawn.  There are multiple reenactments throughout the day. You really can't do it all. If that wasn't enough, the Boston Marathon is also run on Patriot's Day.

I've been hearing about Patriot's Day since we got here.  It signals the end of winter.  If you can just get to Patriot's Day, you can make it through. It's a day for family and friends and finally getting out of the house after the long cold winter.

We started out our Patriot's Day with the reenactment at the Battle of Lexington. I took Kiwi and G-man.  We left at 4:30 when it was still dark and cold. It was crowded and it felt like it took forever for dawn to come.  But when those first shots rang out, the kids were riveted.  There was whining in the dark, but when all was said and done, they were glad they had come.  Pancake breakfast at a downtown restaurant afterwards may have helped sway them to the positive.

Next was the Boston Marathon.  We met up with a bunch of families form church at mile 19.  A bunch of the kid's friends were there.  They had a blast handing out water and oranges to the runners, eating food that everyone had brought to share, and running around in the grass nearby.  G-man scaled a tree with some friends and got in trouble by a policeman who was there attempting to keep everyone in check.  It was amazing to see these men and women and realize they had already run 19 miles.  Unfortunately for them, they still had seven to go!

The kids had fun running across the road to pass out oranges.  A friend who had been there before told us to get them back across the street quick before they got stuck there, because the crowd was coming.  And it came!  I didn't realize how many people run the Boston Marathon!  It was crazy how many people were running. We finally left around 2:30 for the highlight of the day: ice cream!

We drove all the way out to Kimball's ice cream in Carlisle. Huge portions of homemade deliciousness.  It was heavenly (I LOVE ice cream).  The kids ate their ice cream and then climbed the trees.  Gregory got a good 20 feet into the air.  We were out in the boondocks on farmland a good 30 minutes away from where we were.

I wish I could end my post here. The day was perfect. Now I know why all of Boston looks forward to Patirot's Day so eagerly.  But it was here that we began to hear about the bombing downtown at the finish line. Our day was tainted by tragedy and heartbreak and the memory will be forever spoiled. Next year we will do it again. We will make new memories, do new things, and continue the fun family tradition.  I will not allow some crazy fanatics to dictate how I will live my life.