G-man and Kiwi survived their end of year activities at their schools. It was hard for them to keep getting their work done, especially as the weather was just beautiful and outside was way more fun than inside.

As part of G-man's GATE (gifted and talented education) classes, he learned the Recorder. They did a belt system, and he got to Gold on the last day, one short of Rainbow. He did an excellent job learning his instrument. For their final performance of the year, they did a concert for their class. They stood up and did a song for each belt, and you sat down if you didn't get that belt. He got all the way to the penultimate song. 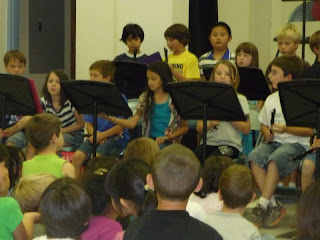 As part of Kiwi's extra-curricular activities, she did a Drama Club. They had a year end performance of an adaptation of Charlotte's Web. Basically, they would all sit in the front, and stand up for the scene they were involved in. The acoustics were not so great, so I can't say that I heard what was going on. But, they had cute little outfits and hats. 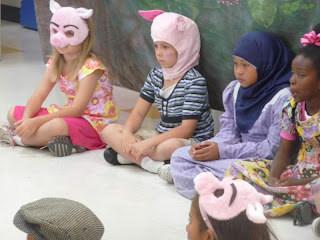 And finally, Kiwi got herself an award at the awards ceremony. She got Best Overall for her class. Not surprising, since she got to the halfway mark in the school year at the top of here class in grades. Surprising, since she tanked here homework at the end and got less than stellar marks for the last quarter. I can tell she is just like me. :) 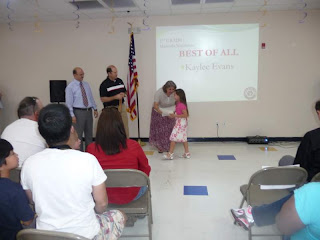 Chad spent a good chunk of time across the country back in April/May.  This coincided with a few major events requiring a little help from family.  Thankfully my mom and dad were able to come down to help me handle the crazy in my life that first week. The first think on the list we the father/son cake bake for the blue and gold banquet.  I think they did a wonderful job.

This event was followed by a carnival (which I made cupcakes for), then Mr S's birthday (garbage truck cake).  We did a lot of baking that week.  That was just the first week Chad was gone.  A week later he left for another ten days. It was pretty stressful but we made it through.  Hopefully we don't have to do it again too soon.
Posted by Luann at 4:37 PM No comments:

At four, Our little S is growing so fast!  He still is obsessed with garbage trucks.  He said to me the night before his birthday that he would still like garbage trucks when he was four.  But when he was five he wouldn't like them anymore.  But when he is six he will like them again.  So in anticipation of a loss of interest in garbage trucks, I decided to attempt a garbage truck cake just in case I never got the chance again.  It was cute at home, but didn't survive the car ride to the park.  Oh well, he loved it and that's what really counts. 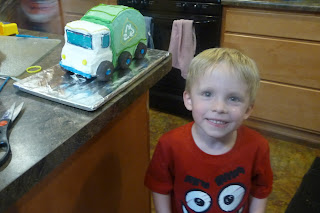 This is his friend he has been sharing a birthday party with since he turned one.  I think in the near future they may be irritated about it, but for now, it makes sense to celebrate with our good friends the Olivers.  Unfortunately the party coincided with a day of record breaking heat and ended with a toddler getting 2nd/3rd degree burns on her feet after walking on some rubberized cushioning underneath the slides.  So make sure your kids always wear their shoes at the park and put them back on immediately when they exit the bouncy house at birthday parties. 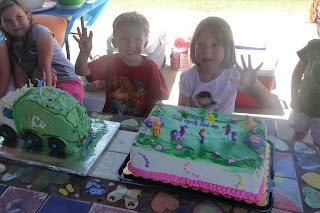 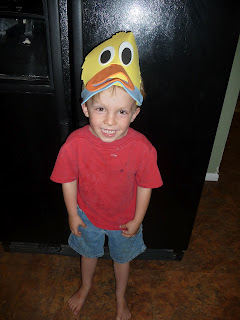 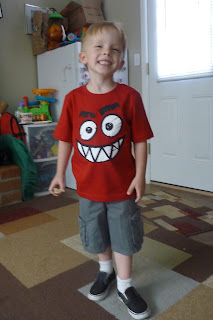 Just a few more pictures of my cute boy.  He's so smart and his daddy's son through and through.  He's pretty particular about the way he likes things to be.  He's super smart and is starting to read and write.  He's left handed!  I can't believe I got one :) I've really been enjoying my time with him lately.  I'm going to miss our afternoons together when he starts preschool in the fall.
Posted by Luann at 12:07 AM No comments: