Now that October is here, I feel a need to reminisce on the things we did during those hot, hot months.  We were busy with traveling, swimming, summer HW projects, spring cleaning and such. Here's a look into what I found important enough to actually hunt the camera down and snap a
photo of it...
As much as I love the freedom of summer, I think I love the cooler weather more.  Welcome back Fall!  We missed you.
Posted by Luann at 12:05 AM 1 comment:

Another fun thing I do every week with Mr. S is our letter Caterpillar. We write the upper and lower case letter on a paper plate. I also draw some pictures of things that start with that letter. Then I help him draw the letter on the plate. 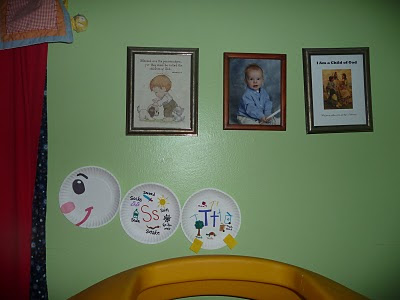 (Wow those pictures are crooked)
The paper plate is hung on his wall. It will slowly grow throughout the year until it is a giant 27 paper plate long caterpillar (counting the head). Mr. S loves to look at his caterpillar and the pictures.

Obviously we didn't start with A. He wanted to start with T, and now we're doing all the letters in his name. He's not great at writing letter yet, but he can make a pretty good capital H. It would probably help if he would decide what hand he wanted to write with. He keeps switching between left and right. Maybe he'll be ambidextrous. Who knows?

Most of my ideas I use with my kids are from a book I bought a few years ago: Alphabet Fun For Little Ones by HighReach Learning. In this book they have various activities to do with your child centered on each letter of the alphabet. Each letter has a few coloring pages, rhyme book, language activities, science activities, small and large muscle activities, art activities, and snack ideas. I pick and choose what i want to do based on what I have available. Some things work better than others, but overall it's a fun book to have around.
Posted by Luann at 11:09 PM No comments:

Then the charter school we put her on the waiting list for called to offer her a spot. My initial thoughts were: Awwww, and WHEW! Dodged a bullet on that one!

I had been gathering supplies and preparing myself for a few months to make this change and was getting excited...but I wasn't ready at all and still had a number of things to put together. Plus, Kiwi has always been a social girl and home-schooling wasn't my first choice. So I put my disappointment behind me and enrolled her.

Now I am finding consolation in putting those educational efforts into the younger set at home. Well, mostly the three year old. I hope to share a few of our little projects throughout the year. I also plan to share a few of our failures so other moms can know what works and what doesn't. I'll start with our favorite thing so far. 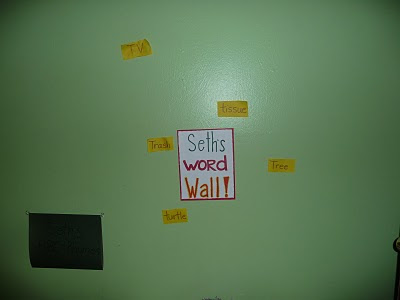 Each week we are focusing on a letter. Mr. S is fascinated by letters and the alphabet. He knows all of them by sight and has learned a majority of their sounds by playing Starfall. On Monday we talk about the letter, practice writing, and then label things that begin with that letter. At the end of the week we put the words on his word wall in the room. 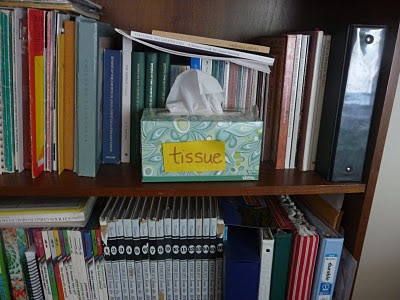 We've done four letter so far, and this is his favorite activity by far. We did H today and put a label up "high," on his brother's "hair", and above the dress-up container full of "hats."
Plus we get to decorate the big empty wall in his room at the end of the week!
Posted by Luann at 5:07 PM No comments:

We lovingly welcomed five new little ones into our home today... 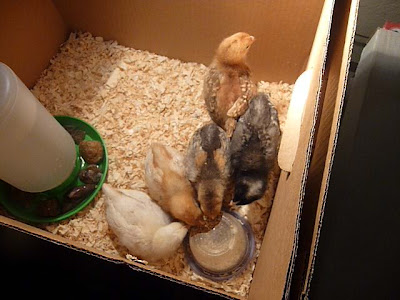 Meet Pepper, Paprika, Snowball...and the other two still don't have names. After the mysterious* disappearance of one of our chickens last week, we felt it was time to add to the flock. Originally we were only getting four, but we couldn't resist getting one more. We're pretty sure we have a buff Brahma, Black Orpington, and White Leghorn. One is possibly a Rhode Island Red, and the last I have no idea. The lady we bought them was only guessing because she bought an egg laying pack, which is a variety of breeds that are all good egg layers. We're really excited to see what they grow into!

*the fate of Cinnamon is a mystery to the younger set. She escaped from the chicken run early one morning. By the time we came out around 6am, all we found were feathers in the yard and alley. According to the younger kids she flew out of the yard and went to live at someone else's house.
Posted by Luann at 11:45 PM 2 comments:

Some as Big as your Head

One of the cantaloupes that the garden grew was really as big as your head. Proof: 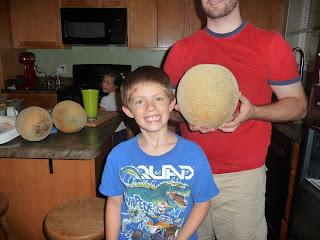 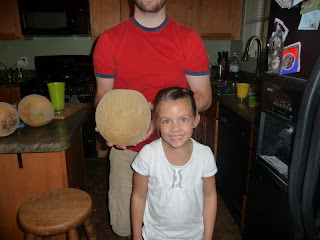 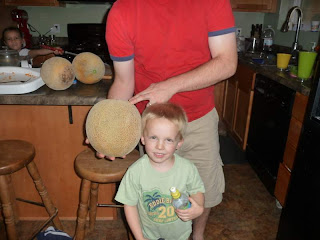 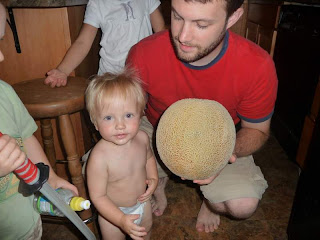 The garden this year was a self-directed affair. We just didn't have the time/desire/energy/pick your excuse to do anything. We missed the tomatoes, so we will have to not do that again. But, since we do composting, some seeds get through. OK, a lot of seeds get through, but most don't sprout. Except for the Cantaloupes. We got five million or so through the Bountiful Baskets food co-op, and it turns out that they grow easily. The following picture is just a small selection of the ones we harvested. 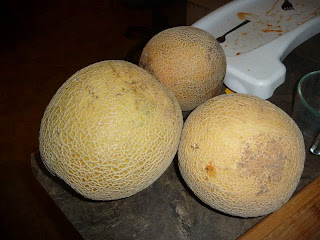 Luann gave some to neighbors, friends, family, an I we still have one in the fridge. We probably got around 15 out of the plants. I do not want to see another one any time soon.

This is just the yearly picture of the kids on the "first" day of school. So it was really the second week for Kiwi, but G-man was starting that day. 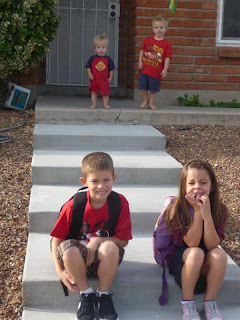