I haven't blogged in a while. Not that we never do anything interesting. I think I've become dependent on pictures to remind me what to blog about. Since we never take our camera anywhere...I'm completely at a loss to remember what we've done lately.

There was the book fair full of tons of people and too many events that overwhelmed everyone so we left. Apparently we missed a circus act that we really cool. Plus we skipped the airshow the next weekend because I just wasn't up to another day of way too many people crowded into one space. Maybe next year.

We ate green stuff for St. Patty's day. I don't think anyone's poop turned green. Although their faces may have turned a little green when they saw the slime colored eggs they got for breakfast. We didn't get around to a spirited reading of "Green Eggs and Ham" that day. I'll have to make sure we do it next year. Although I think I may be leaning towards green waffles for next year. Those looked good!

We went to an awesome park with a merry go round type piece of playground equipment. You know, the type they used to have in parks that would spin you around until you flew off or lost your lunch. Or both. We'll definitely be going back.

We had the ultrasound for baby #4. I sent the picture of the important "parts" to my sister in Utah (without looking). She'll be sending me a package full of stuff that I'll be opening on mother's day. I'm thinking it's a boy based on comments made by the ultrasound tech. Chad's betting on a girl. I think he just likes to be contrary. It's hard for me to talk to Ruth right now knowing that she knows and I don't know. Ya know?

And finally, we've been gardening. I have pictures. I'll have to do a separate post for that one. Since pictures and blogging seem to go hand in hand in my house. Actually, I have to post just one. Here's a picture of the tiling we did at my parent's house. I have to show it off a little bit because it was a lot of work. And I think it turned out pretty nice. 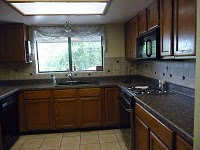 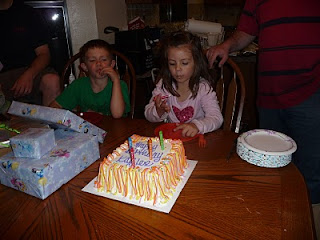 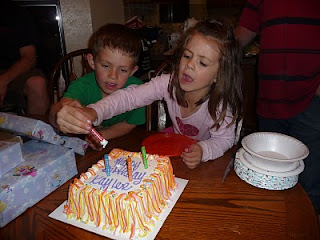 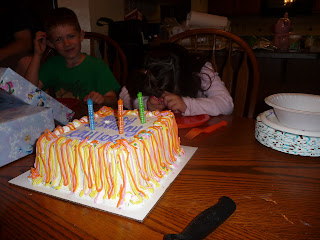 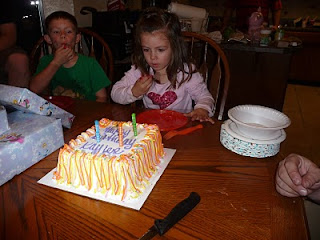 A Kiwi birthday would not be complete without a little drama. I have a friend with an eight year old who is also quite the little over-reactor. So I guess I have to learn to deal with it instead of getting annoyed by it. I love my little five year old, drama and all.

On a side not we went to a very fun play area in Chandler to celebrate her birthday called Makutu's island. Perfect for her age. Chad's 3 year old nephew wasn't quite up to it, but Kiwi had a blast. It's kind of like a overgrown McDonald's play land made to look like a tree. We'll definitely have to go back again some time.

This was all in between tiling my parent's back splash in their kitchen. We had quite the busy weekend. Now I think we may have to tile the back splash in our own kitchen. Right Chad....Chad?