A Little Bit of Crazy 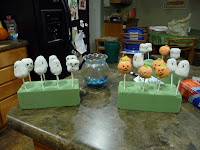 I saw these on a blog I read and decided I had to try them. G's birthday was a perfect excuse to put way too much effort into something that I shouldn't eat anyway. So I made them for him to bring to his Kindergarten class. 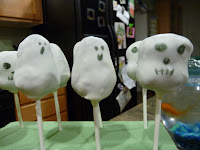 They took a while to make and the edible ink pen I bought did not work well at all. It cost a lot of money too. I don't think I mixed the cake inside the pops long enough so they were a bit lumpy. 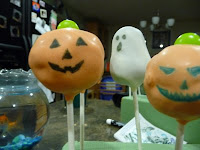 G's class thought they were so cute and really good. All in all I think they were a success. Chad thinks I'm a nut to put this much effort into something that someone is just going to eat. I think its fun despite all the work.
Posted by Luann at 11:04 PM