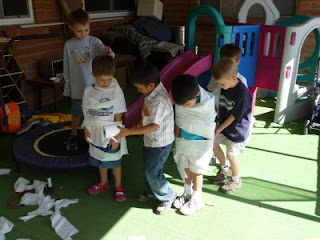 We played a few games. First was chuck the candy corn at your friend's head/in the bucket. Then we tried to stick eyeballs onto a ghost using sticky eyeballs and a ghost painted on the hallway mirrored. This was followed by a lollipop ghost hunt in a dark room with flashlights. Next was bounce the eyeball into the cauldron (ping pong balls with irises painted on them). Probably the favorite game of the morning was the mummy game. Each kid took a turn getting wrapped in toilet paper. The fun part came when they tore out of their wrappings like raging monsters. We ended the fun with a spiderweb maze with candy
at the end. The funnest part of that was ripping down the spiderweb.


At each game the kids were given something to put in their party bag. 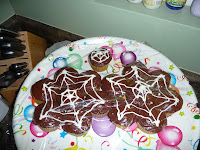 We
made party bags out of paper bags and stickers. Apparently stickers don't stick to paper bags. Either that or I had some bad stickers. G-man's favorite games were the ghost hunt, mummy wrap, and spiderweb maze. The candy corn game was kind of a bust. All they wanted to do was eat the candy corns that missed off the ground.
We made our own pizzas and then had spiderweb cupcakes. I thought the cupcakes were cute. 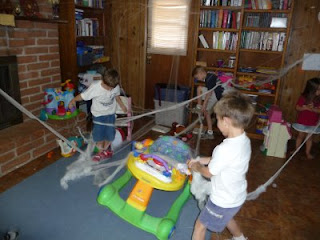 It was a lot of work but G-man had a blast I couldn't stop telling me how much he LOVED his party. He even thanked Heavenly Father for his party in his prayers. I love making my kids happy.
Posted by Luann at 10:35 PM

I got to do a Halloween cousin party for Hunter this year. We combined her birthday with two cousins that were born in October. It was so much fun. We loved the mummy game too!

That's great! What a fun party! I am sure it will be one he will remember!