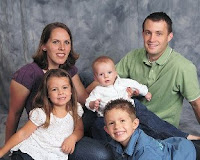 We got some family pictures taken with Mr. S. We finally have some official proof that there are three kids in the family, and not just two. He was seriously underrepresented on the family wall of fame. 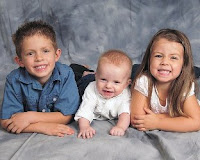 It is really hard to take pictures with three kids. I thought two were bad, but three is horrible. Finding a picture with all three smiling and looking at the camera was impossible. Mr. S really didn't want to sit still for these pictures. Mom and dad were practically doing backflips to get him to hold still for the kid pics. Of course those back flips distracted the other two. I think Kiwi is grimacing in concentration as she tries to remember to look at the camera, and not and mom doing her crazy dance for Mr S. 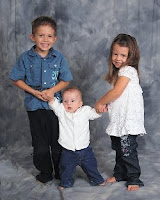 Then you add in the mom and dad issues. I have a huge smile, so I try not to overdo it in pictures. But then I don't smile enough so I just look grumpy. Plus Chad has a tendency to half close his eyes. Then heads are tilted at weird angles and my belly fat... ok, clearly I'm picky. Here are the ones that had the fewest number of complaints. I hate pictures. 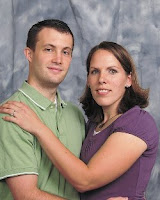 Well, for all you endured, I think you got some awesome shots of the family!! You're better than me... doing a family picture with 2 kids was so disastrous I haven't had the courage to try with 3!! Candid shots seems to be the way to go for us. Anyways, your family is so beautiful... it was nice to see the whole Evan clan together in a picture!

Love the pictures on the blog. I hope we get permission to copy or find out where we can get some.
Mom

Aw what a beautiful family! Pictures are never perfect, but that's what gives them their charm, right? :)