But what about the baby?! 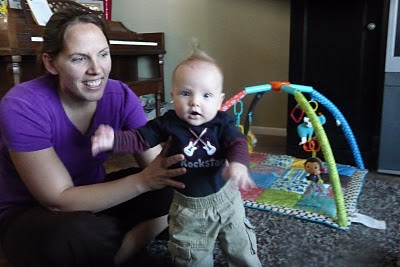 Chad failed to mention in the last post that there was another star this past weekend. We blessed Little J at our church the day after G-man's baptism. He IS a rock star, mostly because his faux hawk has grown to be a good three inches long. And it stays standing straight up. 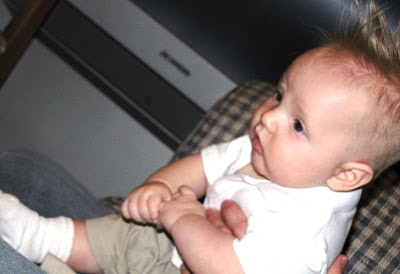 This is how his hair stood for the entire baptism. I was left at home with the task of getting three kids to the baptism on time. When Chad left (about 35 minutes before it was set to start), JW wasn't dressed, Kiwi's hair wasn't done, and S was still napping. Luckily my brother and his family came by to get themselves dressed and Lacy very kindly helped. I wouldn't have made it there on time without her. But J's hair didn't get combed. Oh well, that's life. The more it sticks up, the more head rubs he gets from complete strangers. 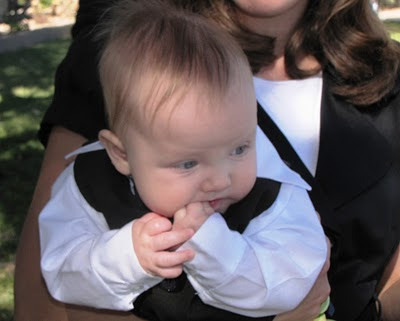 Here he is in his outfit. I didn't get a good picture of him dressed up at all. I ordered the suit online and the neck and tie were way too small. So I went to some stores in town trying find something that would fit. Nothing would. He has no neck due to his copious amounts of neck fat. So the top button was left undone and the tie was held on by a safety pin. I think it kind of makes him look like he's sporting some bygone disco fashions. 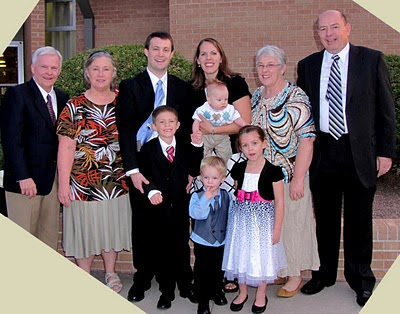 This picture was actually taken after the baptism. Since all the family pictures from the previous post were actually taken after the blessing, I thought it would be appropriate to put this one on. Plus, I love it. My SIL Liz took all the pictures except for the top one (you can tell by the picture quality). I am so grateful to her for bringing her camera and being willing to take pictures. It's so hard to think about busting out the camera when you're busy trying to organize two large extended families. Thank you to everyone who came and for traveling to see the momentous weekend in our family.
Posted by Luann at 6:43 PM

Love the hair do. Our kiddos could be twins I tell ya. Arianna also get complete head rubs from strangers and well as people constantly telling me how soft her hair is. That is very cool that you were able to coordinate both events into one weekend.

what a cute little dude! thx for the kudos :)

Your Welcome ;) I thought I was in the way more than a help