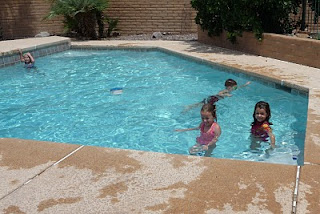 I have always had a hard time remembering to take pictures of things I do with my kids. Blogging has helped me a little bit with this. We'll be doing something fun, and I'll think "I need to blog about this" and then I'll think "I should take a picture." So in reviewing my picture gallery a ran across a few events I wanted to blog about.

Before Jare Jare Binkys was born (Chad came up with that one. I think it's funny. We're nerds.) I took the kids swimming. I have a very very awesome friend who offered (or maybe I begged) to let us come swim with them in the morning at her mom's house. I wasn't about to go to a public pool 9 months pregnant. So three times a week we joined her teenage son and two girls to swim for an hour. It was awesome.

My kids are naturally competitive, and I think hers are too. So we all made great progress. Kiwi wouldn't let go of the edge of the pool at the beginning of the summer. Both my friends girls were using floaties, and Mr. S screamed the first time we got in the pool and wouldn't let go of me. 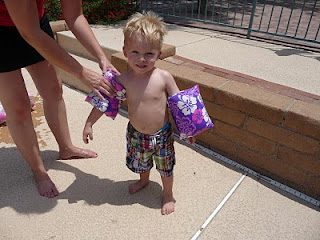 By the end of the summer, all three girls were swimming without floaties. My friend's girls were jumping off the diving board. First Kiwi learned to use floaties (she refused to try them previously). Then she started swimming without them for short distances. She still won't jump in, but hopefully we'll get over that fear next summer.

Mr. S was swimming and jumping off the edge of the pool with floaties on by the end of the summer. He wanted to swim like his siblings. I would take him out to the middle of the pool and he'd insist on "swimming." I'd let him go and he'd wiggle his whole body and call it swimming. It was super cute. He also had a superman towel with a hood that made him look like a Jawa (more Star Wars references for those who don't know). We called him Super Jawa. 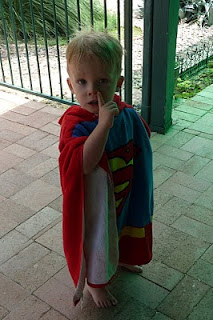 He's just trying to get the chlorine out of his nose. It stings ya know.

G-man was swimming at the beginning of the summer and at the end was still swimming. He did learn to hold his breath under water and touch the bottom of the deep end. He also learned how to horse around in the pool with a 14 year old boy. He had a lot of fun.

I couldn't have survived the summer without swimming. It's amazing how water takes the pressure of the body, especially my back. I have a feeling the J-baby will be a super swimmer with all the time he spent in a pool before he was born. And no, I will not be posting (and do not have) any pictures of me in my suit. I'd just rather not. Thanks Megan for letting us swim with you guys.
Posted by Luann at 11:19 PM