Living Off The Land

We've been having a fun little food adventure at our house. It involves eating weeds.

Has anyone ever heard of purslane? Here's a picture: 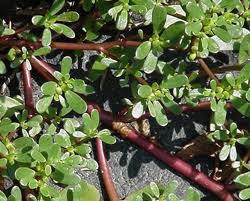 It is growing all over our backyard and has been since we moved into this place. So, naturally, we decided to start eating it.

One of Chad's coworkers told him about it after receiving it in her CSA box a few years ago. He's been trying to convince me to eat it since. I was a little wary, seeing as I've always been taught not to eat weeds and other random foliage that may be growing in the yard. It may stem from a serious reaction I had after eating lawn mushrooms when I was four (how was I supposed to know they were poisonous? The neighbor kid who dared me to eat it obviously didn't). I would just ignore Chad and pick those darn weeds. They pop up every year after the monsoons and are pretty annoying.

After seeing a blog post with a recipe for it (inspired by a woman who received it in her CSA box) I started thinking more seriously about trying it. Then I looked it up on the internet and apparently it is full of a lot of Omega 3 something or other and is actually good for you. So I looked up a few recipes. We've mixed it in with our salad at dinner. I've mixed it in with a potato salad. Today we had it with some zucchini and tomatoes. The results are promising! The older kids think it's fun. It doesn't have a very strong flavor, so it's great to add to any vegetable medley you've got going on.

Maybe you happen to have this weed in your yard. Or maybe you're the type to care for your yard and not allow weeds to grow. In that case, come to our house and pick some! There's plenty to go around.

Here are some of the recipes I tried: The second link has some information with recipes at the end. We tried the potato salad. It was fabulous.