For the Love of Trash Cans

Our little Mr. S has quite an obsession with trash cans. I'm not quite sure if it's garbage trucks or trash cans, or the combination of the two. Either way, I think there needs to be an intervention. Here is my proof:

-Tuesday is trash day, but the trash excitement begins Monday afternoon when our neighbor across the street puts out her trash cans. As soon as he sees it he tells me he will be putting out the cans with his daddy when daddy gets home for work. "daddy take out trash cans after work."
-We don't recycle enough to put out our recycling can every week. We could go two weeks for our regular garbage can, but diapers in a can for two weeks really start to stink. The weeks the blue trash can doesn't go out are quite tragic. Much screaming ensues when the blue one is left behind.
-Tuesday morning starts early. Mr. S wakes up and trots to the front window to watch for the garbage truck. When the garbage truck comes he runs to the window in front, then moves to the window in his bedroom so he can view the truck making it's way around our circle.
-Everyday is spent playing trash man. It's amazing what he calls trash cans. Duplos stacked two high (in matching colors), a chair to his table and a baby doll high chair, little counting bears, our hampers...
-Last week he dumped all his toys into our hampers, pretending they were trash cans. that was a fun mess to clean up. His toys are the trash, although the play food is his favorite thing to use as a trash can.
-Mr. S doesn't watch TV and movies. He watches youtube garbage truck videos. They are videos of garbage trucks doing their thing. I was able to give him his first decent haircut while he watched a garbage truck video. When they end, again, there is much weeping and wailing.
-We went to Target the other day and found a megablocks garbage truck. It had a recycling can and an arm to lift the can into the truck. Mr. S would not let the thing go. I was able to sneak away with it and put it back. He noticed and blamed Chad. "Where's garbage truck? Daddy take garbage truck. Daddy mean." This was repeated multiple times throughout the next few days. It was a fun few days since generally he prefers his daddy over me.
-I embraced the garbage truck love the other day and built a city for Mr. S. Each house had a trash can and his garbage truck went around and picked up trash. Although it turned into cleaning the Webelot castle with a toothbrush. Two year olds are a riot. 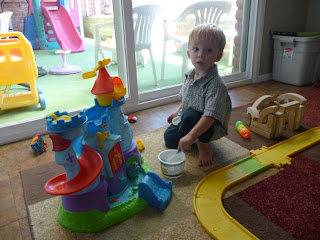 I love it when kids still have imaginations. It's kinda rare these days! Hope to see you guys soon!

That's too funny! What a weird obsession. Haha!

Is he really talking that well? I'm starting to think more and more that we need to get early intervention with Chase. He never says sentences. It's just a word here or there, or he'll add it's in front of something. Is that normal for 2 1/2?

When we lived in Pennsylvania, Jordan and I decided that being a garbage man could be an incredibly lucrative business. The city was not in charge of trash pick-up and individuals had to find their own service from a multitude of options. Our trash guy lived down the street from us and he was pretty much a one man operation. But, based on how much we paid him each month and the fact that he seemed to do this full-time, we're guessing he was raking in the dough.