Oh summer, where have you gone?  We have been busy with many adventures and activities.   June started out with camping, followed by Chad's birthday.  In typical Luann fashion, I decided to torture my husband by planning a vacation to celebrate.  I forget that just because I would LOVE to travel for my birthday, doesn't mean Chad does.  In face next year I think I will plan to go to my mom's for his birthday and leave him with gifts (no cards) and a fridge stocked with cheese and rootbeer.

Anywho, back to the travel.  We have a timeshare, and thought we'd try two of the more obscure resorts (aka, not Disneyland or San Diego).  We stopped in Indio CA and spent two days swimming because it's just as hot there as home. 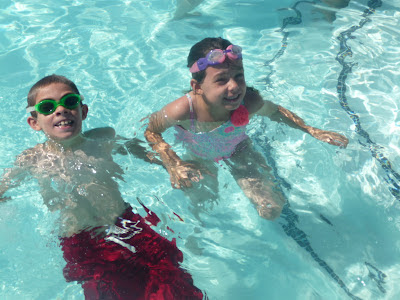 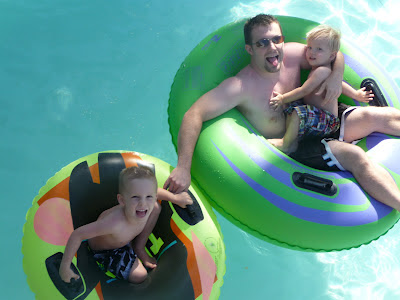 With swimming our only entertainment outlet, some improvising had to be done.  A good hour was spend trying to make a couch cushion bridge.  It proved to only be successful for those aged four and under. 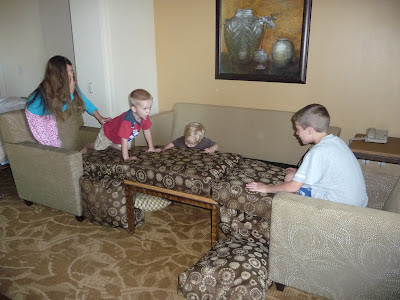 Our next stop was Big Bear, a city in the mountains of San Bernardino County.  It's where the people of LA go to ski in the winter.  There's also a lake and lots of places to hike.  We went hiking, took a pirate ship tour, and played monopoly. We really know how to have a good time. 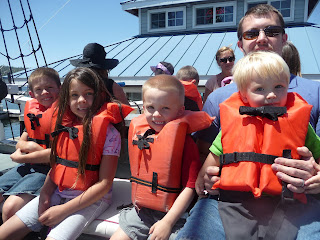 Just a few happenings in Big Bear - On the "hike" along the lake, Chad left me with the older two because the younger two were done.  We didn't have two cell phones because mine was dead (as usual), so meeting up at the end became dicey.  We were supposed to meet at an observatory, but it wasn't accessible on foot.  We found each other eventually, but I was pretty stressed waiting around (15 minutes is an eternity sometimes) and wondering if we were going to have to hitch a ride back to the resort.

On the Pirate ship, one of us had the wonderful idea (I won't say who) to buy candy and soda to feed the kids and keep them "busy" on the 90 minute trek around the lake.  We were trapped in a 1/3 scale replica of a pirate ship with a sugar high almost 2 year old and no way off.  This was our first experience seeing a direct link between sugar consumption and crazy in JW.  Eventually he was left to scream it out on the floor because nothing else was working.  I'm sure the rest of the tour LOVED us.

Overall, this was our kind of trip.  Laid back with plenty of time to chill and do absolutely nothing. The kids got their fill of cable cartoons, and I got my fill of vacation.  Home is always so much nicer after being away for a while.

Wow, sounds like fun. Would have loved to have been there. Tell Chad to be a man and enjoy the moments. They will be gone before you know it.

Wow, sounds like fun. Would have loved to have been there. Tell Chad to be a man and enjoy the moments. They will be gone before you know it.