G-man: I have to write this down, because it was the best thing about Christmas morning at our house. G was the first one up out of the kids that morning. He's always been our early riser and for whatever reason he never gets up until after he hears someone else awake. Chad and I woke up to him using the restroom, then he hopped right back in bed. Within a few minutes he started singing Christmas songs. Silent night, away in a manger...He started out soft and then got louder and louder until Mr. S was awake. Once his little brother was awake they came in a snuggled in bed with us. Within a few minutes the singing started again. I know his ultimate goal was to get his sibling out of bed so he could open presents. I couldn't think of a sweeter way of getting it done.

Kiwi: We ventured into the land of Barbies this year. I've been resisting for quite a while. Mostly because girls love to take their clothes off but can't dress them, so you end up with a home full of naked 6 inch tall women. I find it creepy. But, we tried polly pockets and those are impossible to dress, everything but the doll and clothes get lost, and the clothes/dolls get ripped and broken (because they are impossible to dress. Kiwi was given a Princess Tiana and Prince Naveen doll from for Christmas. She loves them, but the thing that disturbed me the most was how often they were playing face to face. What is she doing with these dolls? Are they talking, dancing... kissing? I really didn't know she was into the whole boy/girl thing. But then she was flirting and playing chase with my friend's nephew during a Christmas party. Do girls really get into this so early? I'm sure it depends on the girl. I'm not ready for this one.

Mr. S: This guy's vocabulary is skyrocketing. He's finally speaking clearly enough to be understood and loves it. He'll repeat a word (getting louder and louder each time) until you acknowledge that you hear and understand what he's saying. His recent obsession is with a book about"Things with wheels." At the end of the book is a dump truck pouring a load of dirt on the ground. He'll grab the book and ask dirt? while holding his hands in a questioning gesture. Then he flips to the back of the book to show you that he found it. He then repeat about 10 times. Very cute, but starting to get tiresome. You can only hear the same one word sentence so many times in a row...I think it's time to hide that book.

And now, a moment of silence for the coolest Christmas present EVER. I think it is now our goal to one up Santa every year. Sure, Santa got you a scooter, but mom and dad got you something that could potentially cause you to break your neck. How awesome is that? 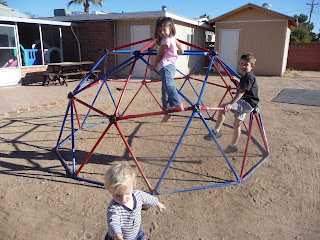 Love the stories. Hey - that is cool to one up Santa. You will always be the hero. PS, they can break a neck or arm on a scooter as well.