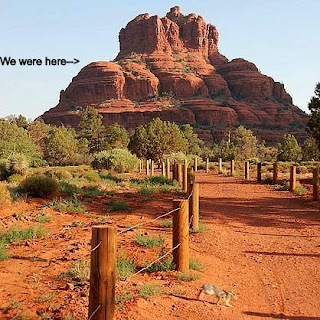 Chad and I took the kids and his twelve your old nephew to Bell Rock in Sedona this weekend. I'd only hiked it once before when Chad and I were first married. It has a very open climbing area and is a great hike for kids, at least on the lower areas. Unfortunately, we ended up no where near there. I found myself about as high as a hiker can get without climbing equipment with a 4 year old, 6 year old, and 12 year old in tow. Since we had gotten there by climbing straight up a crevice in the rocks, going down the way we came didn't seem like an option.
At this point I felt like a complete idiot and I was terrified. Why had I not followed my instincts and refused to climb that crevice? Why had I allowed a 12 year old to lead the way in the first place? I had no idea where we would be when we started going up. Chad had taken the baby and the water with him to where the main hiking trails were. I hadn't even come near this part of the mountain when I hiked it before and now I had to find a way down it. All I could do was say a little prayer and start climbing down. I helped Kiwi and G-man went with his cousin. It took all my effort not to let my fear show, especially since Kiwi was scared out of her mind too. Climbing up mountains is fun, but the going down is the hard part, especially when you're walking on a path that is barely more than a foot wide. Somehow we made it down and found Chad. I have vowed to never be left alone with children while hiking again.
Posted by Luann at 8:45 PM

Looks like that 12 year old got his sense of direction from his dad, ha, ha. Remember the trip to the swimming hole and back! Always an adventure...

Glad you made it back safe & sound. Just think, in a little while it will be a funny experience.