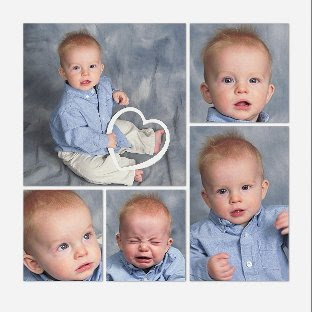 Mr S is now 7 months old and much to my dismay has sprouted a tooth. G-man didn't get a single tooth until he was over a year. Kiwi got her first at about 9 months. Now I have a 7 month old with a tooth. Will the next one get teeth at 5 months? Its really throwing a wrench in the whole nursing thing and I'm totally not ready to be done! He's growing up way too fast!
I was hoping he wouldn't start crawling until after Christmas, but it looks like he may start sooner than thought. He's been getting on his hands and knees a lot lately. He's also fairly mobile for a baby who doesn't crawl. He can do a 360 on his bum and his reach gives him a few feet of reach. So I have to be careful about what I leave around him. His favorite thing to find and eat is paper. He throws a major fit if you take away paper he has found. He's already managed to eat a bit. Forget rice cereal, bring on the newsprint.
I'll probably have to give in soon and cut his hair. It sticks straight up and I think its going to start looking more ludicrous than cute. If he were a girl it would make a great piggy tail. Its so fun how different each of my kids has been. What an adventure having a baby is, even the third time around.
Posted by Luann at 11:12 PM

What great pictures!! I love the idea of doing all the faces, even the cry.

H got his teeth at 8 months, and I just about threw in the nursing towel too. I'm glad I stuck out this month though, because he's totally over biting already. Give it a little bit of time, and keep LOTS of teething rings nearby when you nurse.

What a cute guy! It seems my kids have followed the same pattern, with the youngest cutting teeth earlier than the previous. I've nursed through teething with all four. With Margo, I found that when she'd "apply pressure" ie bite down, or begin to bite down, I'd just apply pressure to her cheek with one finger. It got her attention, and she'd get back to business.

Looked at the pictures on the JCPenny web sight love all of them but can't afford to order any. He is the cutest tho.
Mom