We had a lot of fun carving pumpkins. Probably the best part was sitting Mr S up on the table and letting him play in the pumpkin "guts." While the kids cut, he felt and tasted. Every time he had a taste he would cringe but then a minute later would put the stuff in his mouth again. There are some drawbacks to being the third. However, he gets to experience a lot more than Gregory did as a baby, both good and bad. 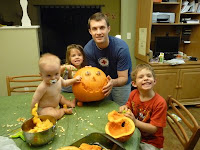