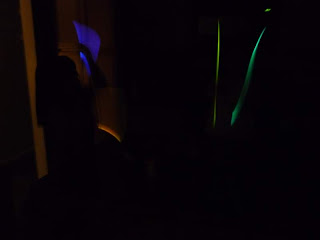 Fireworks From Afar. That was the plan, anyways. But the monsoons made other plans. We were getting the kids ready for going up on the roof to see if we could spot any of the fireworks displays, and as it got dark, the rain started. It lasted long enough that we were not interested getting wet. We tried to watch a little of the PBS fireworks show, but that was not at all interesting for the kids.

The highlight was the lightsticks that we picked up from Target, a pack of 15 for a buck. The kids played with them for awhile, and had so much fun waving them around. Then they took them to bed, where it was darker, and they stayed up for a time just playing with the lightsticks. As we were going to bed, it was clear they had played until they literally fell over exhausted, clutching the lightsticks.
Posted by Chad at 11:14 PM