My poor kids. They were in school forever! AZ school starts a month before Massachusetts.  Add in a week of snow days, and they were in school from the beginning of August until the end of June.  It was a long haul.  But they did it!

Gman finished up fifth grade and Kiwi finished up 2nd.  Since middle school starts in 6th grade, the guy right here was the star.  Here he is after his "moving on" ceremony, sporting his long hair and "I don't care" attitude. 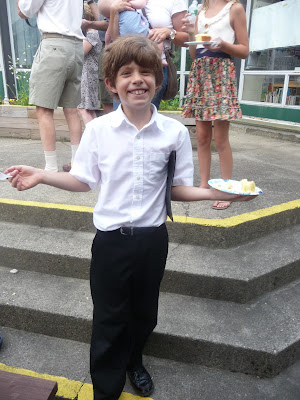 In the fall I'll have three in school.  Little S is going to kindergarten.  I'll only have one kid at home for four hours every morning.  Poor JW is going to be so bored.
Posted by Luann at 9:10 PM