We had another piano recital again! What a shocker...This year there were some major changes though.

First and foremost is the addition of Kiwi into the line-up. She began lessons back in January after much persuasion and encouragement. Come to find out, she loves it. She's picking up on it pretty quick. She really enjoys music (just like her mama). If I want to make her more willing to do chores, I offer her headphones to listen to music while she works. 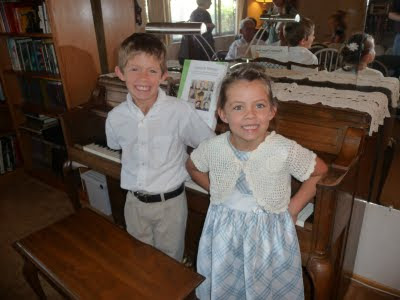 G-man continues to progress. He had some challenging pieces for his recital this year. Frustration was felt in abundance. But we made it through and I think he is a better pianist because of it. He is progressing through one and a half levels each year. I'm trying to cram as much learning in as possible now because I know once he hits middle school, piano will probably be a bigger fight than it is now.

The second major change was who taught most of the students at the recital. It was me! I have been swapping lessons for my kids with a friend for the past three years. She taught G-man, I taught her oldest daughter. She also taught four other students as well. Over the summer I began teaching her younger daughter. Then she went back to work full time and I took all her students. She still teaches mine, but even that is a stretch with her schedule. I'm so grateful she still teaches them, because I can't do it. Just giving them suggestions when they practice is met with much whining and annoyance.

Teaching piano is a challenge for me. My theory skills are lacking and I'm basically just teaching based on my experience as a student. Plus I have to juggle my other kids while trying to teach. It can be distracting for the students and frustrating for me at times. Thankfully all my student's parents are friends who are understanding and supportive. No one has grand visions of concert pianists emerging from their home. As long as they learn to read the notes and can play church hymns, we'll be happy.