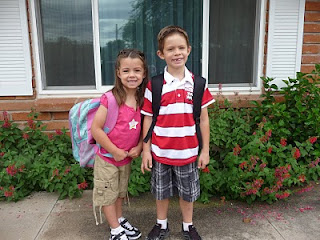 I officially have two kids in school! Kiwi started kindergarten and G started 2nd grade. I feel very lucky that we are able to have them at the same school. G-man tested into GATE (the gifted program in our area) for first grade and goes to a school in a different neighborhood. He is in a self-contained GATE classroom with other gifted kids. We were really happy with his experiences last year and are continuing at the school. Almost all the kids that were in his class last year have returned. He also has a male teacher this year. I am so excited for that. It is so rare to get a male teacher in the younger elementary grades.

Due to the extra support from the GATE program and it's title one designation, the elementary school also was able to keep full day kindergarten. When G-man started kindergarten I was frustrated that I didn't get a half day option. Now that I have two kids in school plus the two little ones at home, I'm so glad Kiwi has full day kinder. It would have been such a pain to pick up kids from school twice a day.

Kiwi had a great week. She didn't know any of the kids at the school. I think she's slowly making friends. Although apparently her favorite past time at recess is chasing boys. The second day Chad took her to school, intending to walk her to the area she lines up. When they got there she hopped out of the truck, told Chad she remembered where to go, and ran off to the playground equipment. She is such a brave, independent little thing. I think it took half the year for G to let Chad drop him off outside his school when he was in kindergarten. By Wednesday I had G-man picking Kiwi up from her kindergarten class so I didn't have to unload the boys from the car.

It's amazing how fast these kids are growing up. I think I may have to walk to pick up Kiwi a few times a week just so I don't feel like she is growing up so fast. But I'm so glad she was able to go without being afraid. I'm so proud of my little girl!
Posted by Luann at 2:00 PM