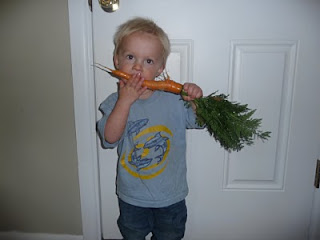 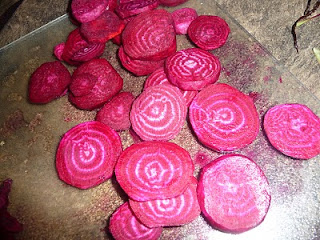 Right now Chad is at a feed store doing some research into chickens. He's been studying some building plans for a chicken coop for the last few weeks as well. I keep telling him if he really wants chicken he has to take care of it. If they die from neglect because he's not around, so be it. I'm not taking care of chickens and a baby at the same time. I guess we can't be like normal sane people and get a dog.
Posted by Luann at 6:14 PM

That carrot looks fantastic. You're making me want to plant a garden.

Maybe Chad could use the same chicken coop building plan as Darrell and Kendra -- their coop is adorable.

That is a huge carrot. My sis in law Jen has multiple chickens at their house. Mu kid love helping uncle Craig go gather the eggs when we go over there. Good luck with those.