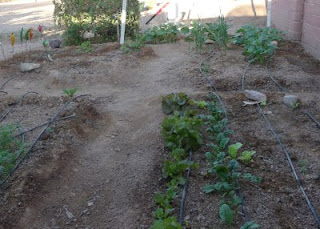 The garden plot continues to be quite exciting at our house. It just doesn't look like much. We've suffered major setbacks this time around. There's the Japanese beetle larvae that like to eat the roots of the newly formed plants. We also have a mystery pest nibbling the lettuce leaves faster than they can grow. On top of that there was this crazy gardener who tripped over the fence because she was too lazy to open the "gate" and fell quite spectacularly on multiple young plants.*


The surprise harvest of the year came from 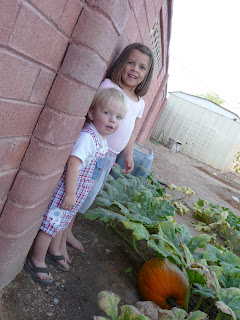 our pumpkin plants. They actually became infested by the squash vine borer which basically eats the plant from the inside out. I think they infested our zucchini plants as well which would explain why they died suddenly. Somehow the plants survived and produced a pumpkin and amazingly the bug didn't get it. It wasn't in time for Halloween, but I will roast it up and make a pumpkin pie for Thanksgiving. There is a second pumpkin growing now that will hopefully be ready for Christmas. 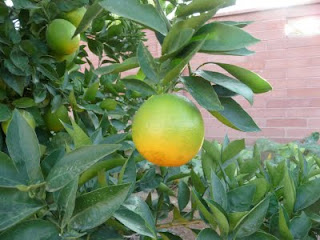 This is also the first year we've had oranges on our tree. This orange tree was planted in the Fall of 2007. In 2008 we picked the young fruit off to let the plant grow. This year we should have freshly picked oranges for the Christmas stockings. Mr. S loves to touch them and loudly shout "ball." He has been good about not picking them, mostly because they don't come off easily. The tomato balls haven't been so lucky. 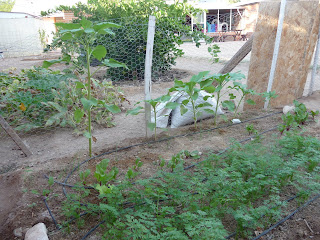 Speaking of tomatoes, did you know you can prune back your spring tomato plants in August and they will produce another round of tomatoes in November? The harvest hasn't been as good as the Spring, but that probably has something to do with the birds and the toddler discovering the fruit.

So far we've been trying hard not to use any pesticides in the garden which has definitely effected the amount we can grow. In the spring we'll be planting in a new spot, and hopefully with a little more research into organic pest control we can have more success.

*Fortunately I didn't knock over the sunflower, as Chad has warned me was going to happen if I kept hopping the fence. This incident goes down as one of the more annoying I told you so moments in our marriage. I really wished I could have gotten away with not telling him what had happened. I just didn't think the large knee and hand prints in the carrot and lettuce beds could be passed off as giant raccoon tracks.
Posted by Luann at 10:30 PM

Sorry about all the pests. Hopefully it will get better as you go. It still looks go though.