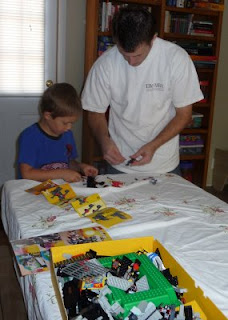 
We spent the last weekend playing with Legos from Chad's childhood.

He collected the castle series and had quite a variety of sets. He has a few castles, two Forestmen sets, and also some wolf pack sets. 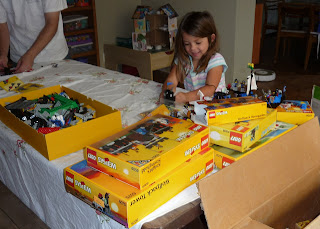 The figures were the most fun for the kids. Kiwi loved making unique guys she could claim as her own. There was even a Forest lady for her to play with. 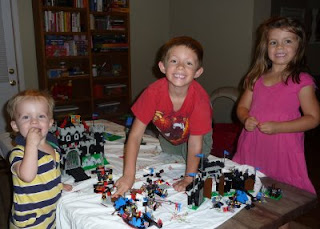 Here we are setting up for the final battle at the end. Mr. S spent most of the time trying to eat Legos. Luckily nothing went down.

G-man cried as we put things away. Poor kids gets a bit obsessed sometimes.

To top off the event, Monday night was spent putting away the sets. This included a lot of cursing from Chad as he tried to locate the pieces that had been stranded around the house during the three days of play (honestly I don't know what he expected). I think this may not happen again for a LONG time.
Posted by Luann at 12:20 AM

Great fun. I think I would be upset too if pieces were missing - but like you said, "What can you expect?" Three kids will do that to you.

Still in the original box. You should try selling those vintage sets and buying some new ones, maybe you could double the size of your collection! I don't have any boxes left, just bucket upon bucket of legos and maybe, some instructions if I'm lucky.