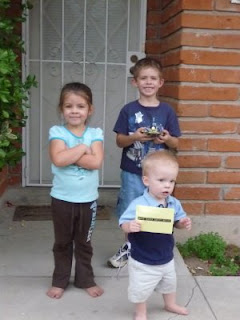 I don't know what's more depressing, having your oldest kid start kindergarten, or having your kid finish kindergarten. In kindergarten they're still little, but first grade? I can't even pretend he isn't growing up anymore.
G-man had a lot of fun in school. He didn't learn much, but hopefully we'll remedy that at his new school next year. He'll be in an accelerated first grade classroom. Our city does the gifted program differently than what I'm used to. I'm trying it out, but a little skeptical about sequestering the smart kids together without much interaction with the normal student population. But then we're used to people who have had abnormal educational and social experiences. Chad was home schooled starting in first and I think he turned out just fine.
So far the first two days having G-man home have gone smoothly. I think it will take Kiwi a few days to get used to having him here and be willing to give him his space. We have lots of activities planned complete with library trips, Joy School, and Field trip Fridays. Today we went to the zoo. It was absolutely beautiful. Too bad this cool weather won't last.
Posted by Luann at 11:38 PM

What is up with the way Kaylee takes pics? She has had that same stance in the last couple of pics I have seen!!

Congrats to both you and G-man for completing Kindergarten! How exciting that he'll be starting an accelerated class already. I hope you guys enjoy the summer all together :) My little guy's last day is this Friday... nuts.

Sounds like a fun summer at your house. We too are gearing up. Unfortunately at our home it isn't the other kids who have to adjust, it is Lexi - ugh!!!