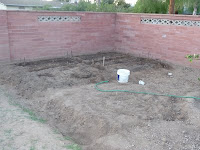 After last year's volunteer watermelon plant we decided maybe we should TRY and grow something. How hard could it be really? Just throw some seeds in the ground and they'll grow right? Honestly I think that watermelon plant was a freak of nature because we've spent way more money on this dang vegetable garden then we'll ever see. We forgot to factor in my inability to remember to turn OFF the water or my impatience for things that do not grow as fast as I want them too, forcing me to dig up the seeds to "check" and see if they're growing. I'm finding I really love growing stuff, and I hope hope hope that we can keep the critters away from the food long enough to actually eat some.

I actually think I'm a little psychotic about growing stuff. We finally had a tomato growing on one of our tomato plants. I was so excited and brought the kids out there to show it to them (I'd been talking to Kiwi about it all day and we were so excited to show dad and G). Obviously, once we got out there Kiwi managed to pick the thing off the plant in typical four year old fashion. I knew I was silly to think that wouldn't happen, but I was angry. So in an attempt not to let my anger show by yelling at her I just threw the little green tomato at her. She cried. Apparently that was just as bad as yelling. Who knew? Now we have about ten little green tomatoes. Maybe when the birds start eating them I could see how throwing the ruined tomatoes at them works.

Here are some pictures of the garden. You can see the fence that we put up to attempt to keep out whatever was eating our lettuce. It didn't help but whatever it was stopped after eating about a third of it. Probably because its getting bitter. I planted the tomato and pepper plants too soon and they go frost bite, but managed to survive. Half the beans and all the chili plants got eaten by the Japanese beetle larvae that live in our yard. The cabbage and carrots keep getting nipped off by birds in search of bugs. Plus, I think there's a lizard prowling around, but I can't prove that its contributing to the plant lossage. The corn and peas are growing tall and one strawberry plant has survived and looks like it may produce one strawberry. Woohoo! If Kiwi picks that strawberry before its ripe, I don't know what I'll do. 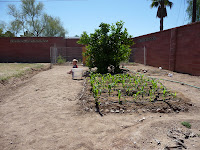 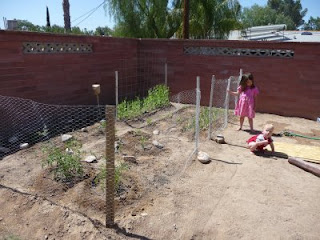 You're very ambitious- good for you!! Maybe if you make compost of the whole garden this year, it'll be more cooperative next year :) We've started our first meager attempts at gardening here, but it snowed yesterday. G'luck!!

Your story of Kiwi reminds me of when Windy W. picked the first tangelos off our tree on Delta and your dad had a hissy fit. Poor Windy. Funny how we get so emotional about a stuff. My dad felt the same whay about his fruit trees.
Mom

hey, i just want to say that you're hilarious, and my hero..and it's weird you have a friend who's name is lyz..that's how i spelled my name all thru high school, and i still have friends who spell it that way, and i've never seen anyone else. weird.