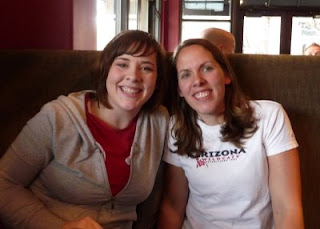 I spent the past weekend with my sister Ruth and her husband Brady. The trip started out poorly and ended badly, but was lots of fun in the middle. I left the two oldest with my parents and took Scooch on his first airplane ride. I had never flown with one of my kids by myself and was a little nervous. I made sure I had everything I needed to get Scooch through the flight including his birth certificate to verify he was indeed my child. Unfortunately I forgot to double check I had the proof that I was his mother and left my wallet behind at my mom's house. After some extra security measures including a pat down of myself and the baby and being labeled a "suspicious person", they let me on the plane. 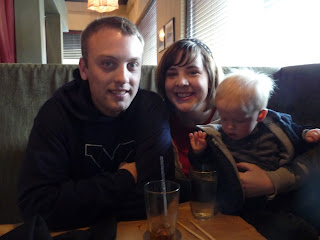 The next few days were spent shopping, eating, and watching movies. Scooch met his two remaining great grandparents (my mom's mom and dad's dad) and got to know the playground in the courtyard of Ruth's apartments. Ruth and Brady took me to my first Sushi restaurant and I thouroughly enjoyed it. Unfortunately that began the downhill slide of the journey. 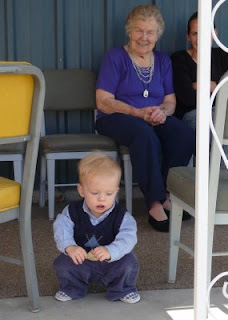 Sunday started out very poorly. Seth woke up around 3am and wouldn't go back to sleep. Seeing as we were in a small two bedroom apartment, everyone enjoyed the pleasure of his wakeful state. Including the neighbors. Brady and Ruth both woke up feeling sick (probably from the Sushi) and we woke up to no hot water. Aparently the water heater decided to stop working while I was there. Scooch remained grumpy from his wakeful night. Later I discovered his mouth was covered in canker sores. Probably from licking too many shopping carts or floors or strange children's push toys. I can't wait until he grows out of the mouthing stage. So here I was with a kid who was in a horrible mood and who wouldn't take a bottle or pacifier. 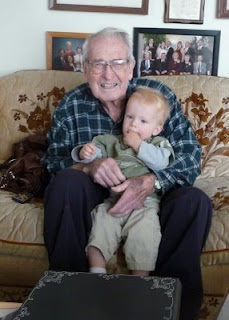 In an attempt to redeem himself or perhaps just to take his mind off the pain in his mouth, Scooch decided to start walking on Sunday. Each of my kids has been an instant walker. One day they just decide they want to walk and do it. He went from taking no more than 2 or 3 steps at a time to walking across my Grandma's kitchen to get me. It kind of made up for his crankiness and it was cool that Ruth and Brady got to see that. Watching a kid learn how to walk is one of the coolest milestones that kids reach. 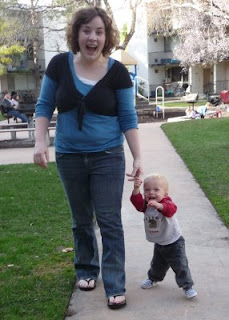 The trip home wasn't as bad as it could have been since Scooch was still refusing a pacifier. This time we were able to get a window seat which occupied his time. Although he still would scream at the top of his lungs whenever he was dissatisfied with the level of his care. I honestly don't think I'll travel with a one year old again. Its quite humiliating. I felt especially bad for the guy across the aisle trying to sleep. I saw him jump a few times.

I'm sure Brady is grateful to have his office back instead of having to study in the pantry. Although that really can't be too bad. You don't have to go far to get a snack. I know Scooch is glad to be back in his own house. He slept really well today. Its nice to be home after a long trip. I think I stayed away long enough this time.
Posted by Luann at 11:14 PM

Hey, at least you got him walking out of the trip. Hopefully it will go better next time.