The Many Trick of Mr. S 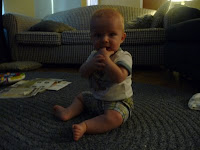 Now that the baby is 5 months old, he has officially decided to start doing more than just be a slug. Granted, he was a very cute, smiley, wiggly slug, but still a slug. Here are a few of the things our little guy likes to do.

1. Sit up: He can sit pretty well by himself as long as he doesn't forget he's sitting and straighten out his legs. That resulting crash to the ground when this happens is not fun, so mommy tries to stay close. (I have a video of both G-man and Kiwi crashing to the floor because I was not close enough to catch them while taking the video. I'll have to try and get a good crashing video of Mr. S for the sake of tradition).

2. Roll over: It took him a full five months to do it on his own, but now when placed on tummy he will skillfully and quickly roll onto his back. I think he decided it was easier than screaming until mommy turned him over. Although he will scream if forced to repeat this trick more than two or three times. He probably could roll onto his tummy, but I don't think he will anytime soon. 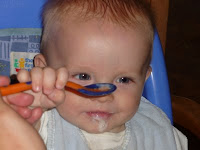 3. Eat Solids: He's only had cereal three times, and is still getting the hang of it. Most of it ends up on his bib, and I think the spoon is more fun than the food, but at least it give him something to do during dinnertime.

4. Bite: I don't know if this kid is teething, but if he can get something close to his mouth, it will go in. His favorite things to gnaw on are his hands/feet, mom or dads fingers, and paper, or at least it would be if mom and dad would let him. That kid has strong jaws, and when he chomps down on a finger, it hurts.

5. Drool: When Mr. S chomps down on your fingers, expect slime along with the pain. He has been drenching his shirts as of late and I may have to start packing some bibs. (oh the horror!) 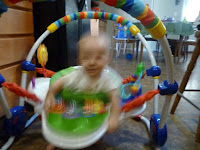 6. Bounce: Thanks to G. Nancy Mr. S has a place to expend some of his pent up energy. He loves this beast of a play center, especially the little sun that he can grab and chomp down on as hard as he wants.

This kid has a lot of energy right now. He's always moving, always talking, always drooling. I love this stage when he's full of personality but not really moving yet. I dread the challenge of baby proofing my house in a few months. Curse you Legos!
Posted by Luann at 12:51 AM

Can't wait to personally see him in action. I hope he doesn't grow up too fast and I miss it.
Mom